This is a text widget, which allows you to add text or HTML to your sidebar. You can use them to display text, links, images, HTML, or a combination of these. Edit them in the Widget section of the Customizer.

Have your cake..and eat it too

My 12 year old son is well…a 12 year old boy.  He’s complicated, sensitive, a perfectionist to a fault, extremely bright and has ADHD. He loves science, magic, experiments and somehow that accompanies nice with cooking.  So he went to a banquet with his dad and had cheesecake.  As a side note, when you have young kids you rarely go out eat and when you do dessert is out of the question.  As a parent of kids in a restaurant you know there is time limit that if exceeded will result in a disaster and most likely you being asked to leave the restaurant.  Not to mention the cost of dessert!

He became quickly obsessed with cheesecake and making one himself.  I don’t like cheesecake so this makes it a completely acceptable dessert to have in my house because I will likely not partake in such an indulgence.  For him to make cheesecake on a weeknight when I have to shuttle kids to practices and what not, I had to call in reinforcements.  I am truly blessed to not only have someone who will be willing to help a 12 year old boy make a cheesecake long after his ADHD medication has worn off, but someone who sees it as a fun thing to do.  My fiancé took on the challenge without ever making a cheesecake himself, and helped my son complete his week long dream of making a cheesecake from scratch. 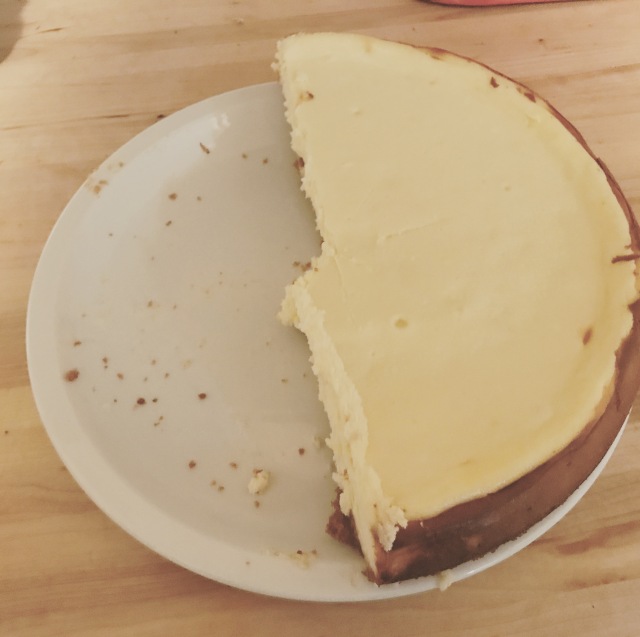